Click on the myths below to find out the facts.

Myth #1: The intrauterine device is not suitable for teens and nulliparous women

This myth arose out of concerns about the smaller uterine cavity and cervical diameter of teens and nulliparous women. Today we know that an intrauterine device can be inserted safely in this population and beneficial especially for adolescents who are at high risk for unintended pregnancy. The American College of Obstetricians and Gynecologists (ACOG) recommends that the intrauterine device should be a "first-line" option for all women of reproductive age.

Myth #2: An intrauterine device should not be inserted immediately after childbirth

For many years, it was assumed that an IUD should be inserted after childbirth only after uterine involution was completed. However, in 2010, the Center for Disease Control and Prevention (CDC) published the following recommendations for breastfeeding or non–breast-feeding women with respect to contraceptive use:

1. A reduction in the risk of unintended pregnancy in women who are not breastfeeding
2. Providing new mothers with a long term reversible contraception.

Myth #3: Antibiotics and NSAID should be administered before insertion

This myth arose from concerns about Pelvic Inflammatory Disease (PID) and insertion-related pain. However, a review found no benefit in the use of antibiotics prior to insertion of the copper devices or the levonorgestrel intrauterine system to prevent PID. Data indicates that the incidence of PID is low among women who are appropriate candidates for an intrauterine device. Similarly another finding by Allen & colleagues indicates that nonsteroidal anti-inflammatory drugs (NSAIDs) did not improve symptoms of cramping during or immediately after insertion of an intrauterine device.

In the small percentage of women in whom it is difficult to pass a uterine sound through the external and internal os, cervical dilators may be beneficial. Gentle, progressive dilation can be accomplished easily with minimal discomfort, easing intrauterine device insertion dramatically.

Intrauterine devices do not terminate a pregnancy. They prevent fertilization. The levonorgestrel in Eloira increases cervical mucus and suppresses the endometrium.

Intrauterine devices have a monofilament string that does not increase the risk of pelvic infection. Eloira may actually have a protective effect against PID. Compared to copper T the levonorgestrel intrauterine system had a cumulative gross rate of Pelvic Inflammatory Disease that was one fourth that of the women with the copper intrauterine device. Theoretically, this may be a result of the thickening of cervical mucus, thinning of the endometrium or decreased bleeding caused by the levonorgestrel intrauterine system.

Intrauterine devices have not been shown to cause infertility. There may be some delay in return to fertility after the removal of the levonorgestrel intrauterine system, but all women who remove the system to get pregnant do get pregnant within a reasonable amount of time.

The most common change in menstrual pattern with the levonorgestrel intrauterine system is a decrease in bleeding. Studies vary in the percentage of women who experience amenorrhea, showing 20% to 50% at six months to two years of use. A systematic review of the literature on menstrual effects found that all included studies demonstrated a significant reduction of menstrual blood loss or “menstrual disturbance score” and most showed improved iron levels.

Weight gain is considered a hormonal side effect of some birth control methods. Hormonal side effects are thought to be due to the presence of circulating hormones. In the case of levonorgestrel intrauterine systems, these circulating hormones are significantly lower than the circulating levels associated with combined oral contraceptive pills. Some studies have shown weight gain during the use of the levonorgestrel intrauterine systems, while others have not shown any significant weight gain. Pregnancy results in significantly greater weight gain for the majority of women than do hormonal contraceptives.

Myth #14: IUDs can only be put in during the period 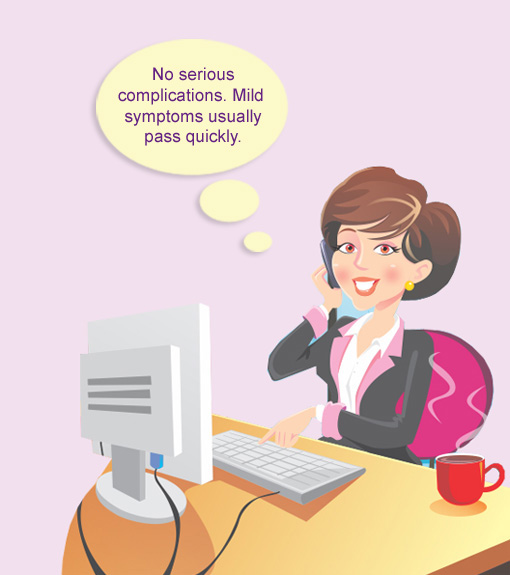 Is it True?
Common myths about contraception, birth control, fertility & family planning! Click to get upto date with the truth.
Check It Out
User Forum
Visit to discuss your concerns and experience with the Eloira women's community. We are available for support.
Visit Forum
Contact Us
Call +91 9833001010 for further queries or write to us at sales@pregna.com
360 view
Check out Eloira in 360 degree view. Click to view the product rotation now.
View Now